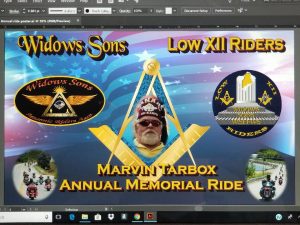 Since 2013 we’ve held an Annual Charity Ride named in honor of Anah Shrine Go-Kart member and friend of many of our original members, Marvin Tarbox, who was killed while doing what he loved most, pleasing children through the Shriners participation in parades. In October, 2011 at the Damariscotta Pumpkin Fest Parade in Newcastle he was fatally injured after his go-cart toppled to the ground. As our Chapter was being formed, we felt the concept of keeping alive the concept of service to others through this annual ride would be an excellent idea.

Thus, we established a scholarship which is now given to the Northern Maine Community College Foundation in his memory. It is for a deserving student in the electrical program, Marvin having worked in that field. Northern Maine Community College chooses the recipient of our $1,500 donation, a student in their second semester. This is our Chapter’s primary fundraising endeavor each year and we welcome you on our ride!  (Cars and trucks as well as motorcycles are welcome to participate and help support this cause!)

WOW! Our 2019 Tarbox Memorial Ride in Year #8 was by far stronger than ever before. 151 riders and passengers joined us on Sunday, June 2nd to raise funds for the Northern Maine Community College Foundation in honor of Mason & Shriner Marvin Tarbox who was tragically killed in an accident while performing with the Anah Shrine Motor Corps unit during a parade.

In addition, this year we also helped to raise funds for Donna Wiegle’s TEAL on WHEELS ovarian cancer awareness tour. Donna plans to ride cross-country to publicize the plight of women who are all too often misdiagnosed when suffering from this silent killer.

Read more and see the photos.